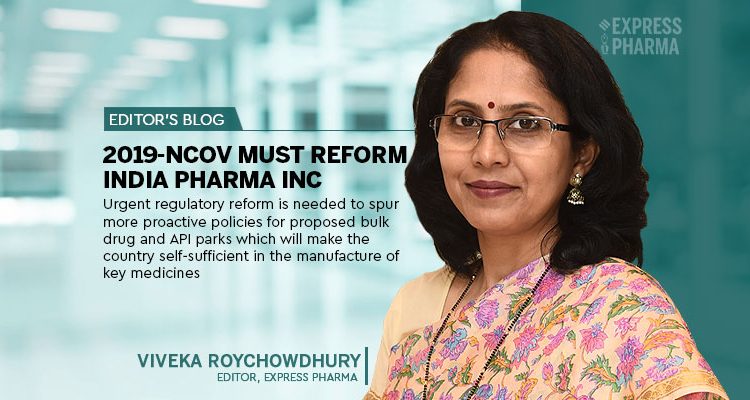 As of February 9, 37564 laboratory-confirmed cases of novel coronavirus (2019-nCoV) infection have been reported, including 813 deaths. The three confirmed cases so far in India seem to be doing well and under quarantine in various medical colleges in Kerala. But with a 14 day symptom-free incubation period, the government is taking no chances. All returnees from China and especially, from the ground zero, Wuhan, are being quarantined. Contact tracing too is on but there are worrying cases of a few returnees remaining untraceable.

The spread of nCoV is not just a medical and humanitarian tragedy. It will have major economic ramifications, impacting not just the industries which have shut down across China but also their clients in various countries across sectors.

The pharmaceutical sector in India is already feeling the pinch. It could be one of the most severely impacted, as many companies rely on China as a source of cheaper APIs. It is fortunate that most companies had larger than usual buffer stocks to last them through China’s Lunar New Year holidays. But even these are expected to run out by February end. Sourcing alternate API manufacturers will take time and prices are already rising as per reports. The government is considering restricting the export of antibiotics and anti-virals to build up a stockpile in India in case 2019-nCoV is not contained.

But there could be a silver lining to these dark clouds. Will these shortages result in more proactive policies for proposed bulk drug and API parks? Will MSME players in India’s pharma hubs see value in re-starting manufacture of key APIs, which they had found non-viable due to cheaper products from China?

Companies like Cipla and Aurobindo Pharma are offering to ramp up production of existing medicines which are showing signs of being effective against nCoV patients. Given the lack of choices, regulators too are making exceptions to the rules. For instance, the Central Drugs Standard Control Organisation (CDSCO) has given an emergency approval to India Council of Medical Research (ICMR) to use a combination of anti-HIV drugs- lopinavir and ritonavir tablets for the treatment of nCoV patients in India.

But there are also ethical concerns. Protocols need to be iron tight, and clinicians and regulators need to be in ‘research’ rather than ‘treatment’ mode as there is not much evidence that this combination will continue to work. While we have good laws, like the New Drugs and Clinical Trials Rules, 2019, which were introduced in March last year, is there enough oversight to ensure that they are being followed in the right spirit?

Of late, the Department of Pharmaceuticals has been cracking down on the “unethical promotion of pharma products” by sending reminders to industry associations to ensure that their members adhere to the provisions of the Uniform Code of Pharmaceutical Marketing Practices (UCPMP). The latest reminder of February 4 mentions that the Department has “received a grievance alleging that pharma companies arrange hotels, accommodation in five-star hotels, local sight-seeing, etc. in conferences conducted by doctors.” The reminder pointedly mentions the national conference of Indian Psychiatric Society 2020 to be conducted in Kolkata this year, perhaps to prove that such meets are already on their radar.

While the Code is still voluntary and not mandatory, the message seems to be that associations should pressurise their member companies to adhere to the code. While industry associations agree that such a code is necessary, a voluntary code remains “toothless”, as many health activists point out. Perhaps policymakers know that enforcing such a code will be next to impossible, given the size of the country.

A day earlier, on February 3, the Ministry of Health & Family Welfare released amendments to a policy dating 1954 for comments. The draft of the Drugs and Magic Remedies (Objectionable Advertisements) (Amendment) Bill 2020 is open for comments for 45 days. The draft expands the list of diseases, disorders and conditions covered from 54 to 78, adding conditions like AIDS.
The draft also increases the penalties and fines for violations as well. Under the draft, the penalty for first-time convictions is imprisonment up to two years and a fine up to Rs 10 lakhs (increased from jail time of up to six months, with or without a fine under the existing 1954 bill). Subsequent convictions will be liable for jail time of up to five years and a fine of up to Rs 50 lakhs, which is substantially more than the current bill which awards imprisonment of up to one year for a second- time conviction.

The draft expands the definition of “advertisement” to mean “any audio or visual publicity, representation, endorsement or pronouncement made by means of light, sound, smoke, gas, print, electronic media, internet or website and includes any notice, circular, label, wrapper, invoice, banner, poster or such other documents.”While Ayurvedic and Unani systems of medicine were covered by the 1954 Bill, the 2020 draft adds the Siddha system as well.

Once again, are our regulatory systems geared up to enforce such a Bill? Will long drawn out litigation deter pharma companies from making such claims? While the intention to protect the patient/consumer is noble, will it be yet another toothless tiger? To be sure, policymakers are revamping regulation but the pace of reform needs to pick up.