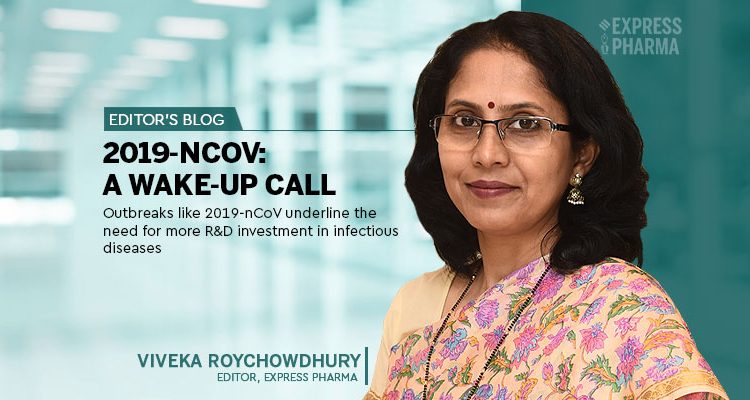 We enter a new decade with yet another new virus slipping past our defences. The virus, detected last December, is a novel Coronavirus (2019-nCoV), and was traced back to wild animals sold in a ‘wet market’ in Wuhan City, in the Hubei province of China. A month later, the death toll of the virus is mounting.

Our precarious handle on infectious diseases is compounded by the pharmaceutical sector’s disinterest in researching and investing in this disease segment as such diseases mostly infect developing nations and are self limiting as opposed to lifestyle diseases. But SARS, MERS and now 2019-nCoV, all from the same family of Coronaviruses, do not need visas to travel across boundaries from developing to developed nations. Will the death toll be severe enough for governments and companies to start taking notice?

Two reports on pharma investments in R&D offer hope, but also show that the pace of the pivot has to increase. The 2020 Antimicrobial Resistance (AMR) Benchmark, finds that more companies are moving to discourage the overselling of their antibiotics and antifungal medicines to doctors and other healthcare professionals. Most companies have a strategy to prevent antibacterial residue being released in factory wastewaters. Furthermore, pharma companies are sharing more data on where drug resistance is emerging.

But the Access to Medicine Foundation, which publishes the AMR Benchmark study, points out that the low profitability of antibiotics is leaving the world precariously reliant on a dwindling number of pharma companies to develop and manufacture them. Since the 2018 AMR Benchmark, two more companies – Novartis and Sanofi – have retreated from new antibiotics R&D, while two companies – Achaogen and Melinta – have filed for bankruptcy.

It is heartening that a company from India – Cipla – features as a leader in the 2020 report because it is one of three companies to reportedly fully decouple its sales agents’ bonuses from sales volumes – a significant step in mitigating against overselling of antibiotics which leads to irrational antibiotic use and subsequently AMR.

The AMR Industry Alliance report shows $1.6 billion annual investment (in 2018) in AMR-relevant R&D. While there is some sustained investment in early R&D and diagnostics for AMR-related products (including antibiotics, antifungals, vaccines), and major strides in responsible manufacturing of antibiotics,  low levels of investment for later and more costly stages of R&D for AMR-related products may mean that many promising early-stage compounds will never reach patients unless governments put in place new mechanisms and incentives for antibiotic development.

Thus it is incumbent on both governments and the industry to experiment with commercial models to tackle AMR as well as disease outbreaks like 2019-nCoV.