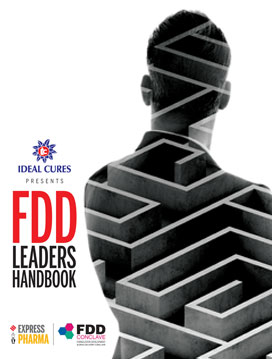 Express Pharma is honoured to present the third edition of the FDD Leaders Handbook. This continues our endeavour to shine the light on unsung heroes of the pharma sector, as part of Formulation Development and Drug Delivery (FDD) Conclave 2019.

As in the past two editions, we had a tough time this year to convinceformulation and drug delivery scientists that they deserve the recognition. One hopes that when we start on the next edition, the level of confidence in their abilities will rise and they come forward to be featured as role models for the industry.

Set out in alphabetical order, our third compilation of FDD Leaders puts the spotlight on 25 personalities. And based on feedback to the past two editions, we’ve ended the book with a list of the leaders featured in the past two editions. This makes this year’s edition a commendable roll call of India’s most experienced as well as young, promising FDD talent.

In keeping with our format from last year’s edition, professionals included in the book had to fill out a form asking for details on their educational background, current designation, years of experience in the pharma sector, the areas of specialisation, number of patents filed, the awards/accolades achieved. They have also distilled their learnings and shared their success mantras, which we hope will make progress easier for many younger FDD professionals.

In the same vein, their thoughts on the future of FDD give glimpses of the vast potential of this segment and we hope that it convinces more talent to follow in their footsteps and make FDD their calling.

And because people are not one dimensional, we tried to get beneath the skins of these dedicated professionals and asked them about their lives beyond their work. For example, Dr C Muthulingam, Vice President – R&D, Mankind Pharma may have 20 patents filed but he is also a singer. Being part of the healthcare sector, most professionals have chosen to focus on their fitness. AV Kiran, Head Formulation Development, Excellence, Sanofi Synthelabo is a body builder since his university days and has represented Karnataka at the national level. Dr Sanjay Parbhatrao Boldhane, Sr General Manager – Formulation Development, Micro Labs has completed 12 half-marathons. Sauri Gudlavalleti, Head, Integrated Product Development Organisation, DRL is an avid cycler and also plays Carnatic classical music on the flute.

But we are convinced that India’s got more FDD talent that we need to discover. Do let us know what new features can be added to the next year’s edition of FDD Leaders Handbook.