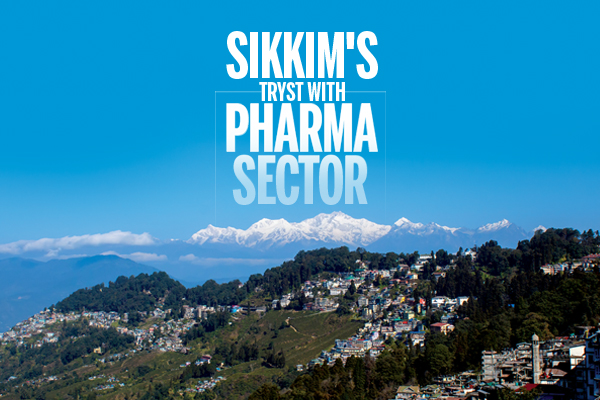 Sikkim, known for its picturesque valleys and lush green hills, is a renowned tourist destination. But, if you think that this is its only claim to fame, think again. The small Himalayan state is also home to more than 40 pharma companies. Till 2014-15, the state was able to attract investments worth of $414.73 million and the figures continue to grow.

The state is not so far behind Gujarat, Maharashtra and Baddi in Himachal Pradesh in becoming a hub for the pharma industry.

In fact, Express Pharma’s August 2016 edition carried an article showcasing the state’s emergence as a pharma hub. Recently, Express Pharma organised the Sikkim Pharma Summit: The Gateway to Growth in Gangtok. It also highlighted Sikkim’s rise as a pharma hub. Delegates representing the pharma fraternity who took part in the summit were also optimistic about the states’ initiative in pulling in many pharma companies despite the odds which the state faces.

So what are the factors luring the pharma players to this state? Let’s examine in detail

Hilly terrains with unpredictable weather notwithstanding, Sikkim has been able to attract the attention of pharma companies. According to Edelweiss Securities, the overall revenue for the pharma sector is likely to grow 17 per cent YoY (year-on-year) and PAT 50 per cent YoY. Conducive government policies in Sikkim which offers 100 per cent excise and income tax benefits in addition to freight subsidy is one major reason for this rise.

Dr Supratim Dutta, Professor Head and Coordinator, ADR Monitoring Centre, Department of Pharmacology, Sikkim Manipal Institute of Medical Sciences points out, “The North East Industrial and Investment Promotion Policy (NEIIPP) 2007 has been the major driving force for pharma companies to make investments in the greenfield projects in the state. Benefits provided by the NEIIPP include excise duty and income tax exemptions as well as capital investment subsidies. Additionally, ample availability of land, uninterrupted supply of power, low manufacturing and labour costs provide a conducive environment for the industry.”

With government strategies focussing more to create a conducive environment for pharma companies to set up their base in the state, P Ramesh, Plant Head, Micro Labs informs that the strategies has been appreciated a lot. He says, “Sikkim has responded extra-ordinarily and performed better than expected. All big pharma giants have ensured their presence in the state and are prospering at a much higher pace than expected.”

According to Verma from Zuventus Healthcare, Sikkim has a huge scope for biomass research as the state is abundant in medicinal plants. He says that the rich cultural background, good administration, overall conducive business environment, etc. will help the state to go to new heights.

Till date in order to reach Gangtok or upper reaches of Sikkim, people used to fly down to Bagdogra in West Bengal or alight at New Jalpaiguri if travelling by train, and then take a car for a five hour drive through a treacherous hilly terrain. Things will change after Pakyong airport was recently commissioned, the first greenfield airport in the entire North Eastern region. Better transport facilities with proper infrastructure will open the floodgate of opportunities for  pharma companies.

Says Ramesh from Micro Labs, “There are a slew of measures which have been adopted by the government, besides providing the necessary infrastructure for the industry to prosper.”

Verma from Zuventus Healthcare says, “This state has all the resources where an R&D centre can be established, like the beautiful climate, incredible culture and it also has one of the best administrations. One very important opportunity in R&D is that the state has a huge scope of BIOMASS Research, as Sikkim is rich in medicinal plants.”

Thus, there are several advantages to investing in the state but challenges exist too.

Ramesh admits, “Some regulatory challenges do exist which are on the environmental, clinical and logistics front.”

According to Dutta from Sikkim Manipal Institute of Medical Sciences, the suspension of the NEIIPP in 2014, has been a challenge for the pharmaceutical industry to adapt to. However, he also feels that therein lies the opportunity for the pharmaceutical industry of Sikkim to strengthen existing systems, and to look for viable avenues to diversify operations.
However, Verma says, “There are no such challenges. We appreciate the efforts taken by our regulators in Sikkim, who really support us by their regular guidance, providing updates related to the CDSCO and DCG(I) guidelines.”

He urges the government to establish a regulatory laboratory to support the regulators and mentions that the work of regulators has increased, as they are less in number and have to take care of almost 50 plants and hundreds of chemists.

The future looks bright for the state provided it manages to chart out plans with more industry friendly policies, better infrastructure and transport facilities so that pharma companies feel more comfortable conducting business. Fortunaltely, the companies have recognised this.

According to Ramesh from Micro Labs, the pharma industry operating in Sikkim is able to maintain their high standard of manufacturing practices while ensuring availability of quality medicines for all in  the country. However, the industry should look for developing and implementing innovative strategies and best in-class practices. More number of injectables and ointment plants could also be explored.”

He also mentions that by placing solar panels, solar energy can be converted to green energy, which will lead to save power and ultimately prevent generation of carbon.

Verma from Zuventus Healthcare says, “Pharma plants need to adapt GMP, GDP, proper process validation processes, data reliability methods and risk mitigation principles. These are important points that need to be addressed and this is possible only, when proper training is parted to the local people who are employed in the pharmaceutical plants in Sikkim.”

Dutta from Sikkim Manipal Institute of Medical Sciences is of the opinion that strong quality management system, with focus on elements such as data reliability, good documentation practices and process validation are imperative in achieving operational excellence which will help pharma companies do business in Sikkim in an easier manner.

Good days await the state’s pharma sector, however, it should increase its readiness to leverage the growth potential.

Dutta from Sikkim Manipal Institute of Medical Sciences advises, “The Indian pharmaceutical industry currently plays a major role in manufacturing and supplying high quality, low cost medicinal products for the global markets, which include the US and the UK. The Sikkim pharma industry should strive to be a part of this growing global demand, by ensuring the export of the highest quality drugs being manufactured in its facilities. Stringent compliance to good manufacturing practices will be instrumental in obtaining approval of the US FDA and other regulatory agencies.”

He also mentions that there is scope for an industry – academic collaboration, with the availability of two pharmacy colleges and one medical institute in Sikkim. The presence of two well established tertiary care hospitals in the vicinity: Central Referral Hospital under Sikkim Manipal University and STNM Hospital under the Sikkim Government, will ease target patient recruitment for clinical trials.

The Sikkim pharma industry should strive to be a part of the growing global demand, by ensuring export of highest quality drugs being manufactured in its facilities. Developing proper infrastructure, ease of transportation, building good roads, pharmacy colleges, and flexible financial schemes with more R&D centres can act as catalysts for progress.

LANXESS will donate another dialysis machine to Nagda Civil Hospital