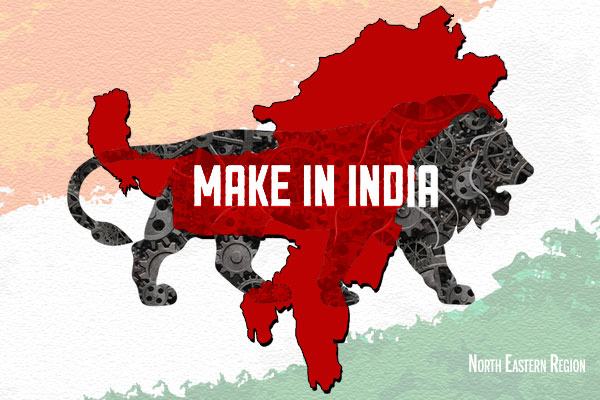 The government is making all efforts to uphold GST and Make in India campaign as their progressive steps. This September, the Make in India campaign will be turning three and the government has given many lucrative schemes to encourage industries to work in line with the campaign. The government is trying to attract investors and encourage them to setup their manufacturing facilities in the North Eastern region and Himalayan states. Last year in May, PM Narendra Modi had said that he will consider the North Eastern Region as the Gateway to South-East Asia. And recently Arun Jaitley, Finance Minister announced that under the GST regime, the government has extended tax incentives to industries in the North Eastern and Himalayan states till March 2027 albeit as a refund.

Under the new GST regime, there is no provision for exemption but there is one section under the Act which permits refunds.

The industry experts are saying that the later move of the government is to implement indirect taxation structure and give exemption to business enterprises from paying sales tax. These businesses will be eligible to claim the refund later. To bring a new tax regime based on exemption, the Department of Industrial Policy and Promotion (DIPP) is working on preparing a scheme which will replace the current system.

However, the new GST regime is critical for several industries like automobile, pharma and consumer goods and companies must start  units in backward areas, where the economic condition of the state is poor just by availing the advantage of area-based-programme. This is a major reason why the government is extending tax incentives since 2003 to these regions. On January 7, 2003, the new industrial policy and other concessions for these states were announced for 10 years. However, companies started looking to exit the state as the concession period ends. To retain companies, the government further extended the concession till March 2017. To those who set up their facilities before march 2017, now it has been further extended for 10 years which will help companies to contribute to PM Modi’s vision of Make in India.

Apart from tax incentives, there is a need for dedicated pharma parks

The most important priority for ‘Make in India’ campaign from the pharma industry perspective should be domestic manufacturing of APIs, as we are over dependent on China and other countries for supply of APIs as well as drug intermediates. Any disruption in supply chain due to any geopolitical reasons could drastically impact our formulation industry. The new draft pharma policy has taken cognizance of this problem and has proposed that formulations manufactured using domestically produced APIs be exempted from price control for a period of five years as well as be given preference for government procurement. The finance minister’s announcement of tax incentives under GST for companies setting up manufacturing facilities in North Eastern and Himalayan states till March 2027 is a positive move and certainly encourage industry to set up their manufacturing plants in this region. Already more than a dozen large pharma companies have made plans for the same.

Apart from tax incentives, there is a need for dedicated pharma parks with subsidised water, electricity, common effluent plant etc. Assistance in land acquisition will help in attracting industry. A proactive drug control administration and skill training centre in the these zones and good logistic as well as digital infrastructure will provide necessary ecosystem for efficient running of such manufacturing plants. As regards to GST, while the government is periodically issuing clarifications on ‘frequently asked questions’, many SMEs will require
guidance on interpretation on matters such as clearance of physicians samples not for sale, treatment of loan licence units, supplies made from erstwhile tax free zones etc. A GST Guidance Cell, in collaboration with industry associations, in these zones will help clear many such doubts.

The pharma sector is the caretaker of national human resources of any country. Being a nation which has more concern and care for human beings and which has a huge population with hand to mouth means of earning, does necessarily require affordable pricing of medicines to all. In pursuit of that, providing tax incentives to pharma companies, irrespective of the zone or region is always a step in the right direction to provide affordable price of medicines to all. So, the continuity of tax incentives to pharma companies will not only boost the industry but also keep the well-being of human health.

‘Make in India’ is a major national initiative designed to facilitate investment, foster innovation and build best in class infrastructure that will further boost the economy and bring in more foreign investment in India. It should not be restricted as a concept and should be propagated to the world that Make in India as a philosophy is a reality and this can happen when the government is serious in giving incentives and tax breaks to companies. This will boost indigenous innovation and also compete with  countries like China for API manufacturing.

Under new tax regime there is no place for complete exemption

The Goods and Services Tax (GST) which stands today as India’s biggest tax reform took the country by storm when it came into effect from July 1, 2017. The move to introduce this revolutionary bill has been appreciated as all indirect taxes are merged under one section. As Prime Minister Narendra Modi called it Goods and Simple Tax, good because it liberated us from layers of taxation, simple because it is uniformly implemented pan India.

March 31, 2017, marked the expiration of area-based tax exemption in the North Eastern states of India. Nevertheless, manufacturing facilities set up before March 31, 2017 can avail 100 per cent excise duty exemption for a period of 10 years after commencement of commercialisation, encouraging pharma and allied industries to set up facilities in these areas instead of neighbouring countries, in turn encouraging ‘Make in India’.

However, under the new tax regime, there is no place for complete exemption. As per recent articles, the central
government will forgo 58 per cent of its share of GST. Clarity on the remaining 42 per cent is expected in the coming six weeks. It is only then that we will truly understand the impact of GST and the extended tax incentive, on this area-based exemption. Manufacturing facilities are looking for comprehensive clarity on the new policies as GST impacts their profitability, pricing and market share. New policies will pave the way for increase or decrease in the number of companies investing in these North Eastern states along with J&K, in turn impacting the Make in India campaign.

If the remaining 42 per cent remains unrecoverable, it will majorly impact profitability and may discourage companies from setting up plants here. We however, are sure that the government will usher in policies that align this tax holiday under GST in a way that will facilitate future investment.

One of the most desired result from tax incentives and boosting industrial growth, is to provide employment on a permanent basis and to generate the industry to come up in the region independently. An MNC or big corporate group with high turnover are impacted by GST and/or subsidy will make a temporary impact, as they tend to shift their base, once their tax subsidy and incentives are over, for example Baddi, Sikkim, etc. Thus, the importance of sustained tax benefit is very critical to ensure that the states are able to retain industrial growth and most importantly, not to lose employment. For example; it is very heartbreaking to see the state of affairs in the biggest and the oldest KASEZ (Kandla) of India, due to the sunset clause. Major manufacturing units have moved out.  Factories/ units have closed down and are in shambles. All the manpower have been totally removed from employment. This creates unemployment,  which is a major set back and ancillary units become redundant.

Thus, another important factor to create impact to the ‘Make in India’ policy, is the sunset clause for income tax benefit for Export Oriented Unit (EOU)/ SEZ. If the government is planning for FDI under ‘Make in India’ concept, other than local manufacturing, supply to the export market should also be accessible to the investor. Hence, the suggestions are:

Tax benefit: States and regions existing under SEZs and new regions need to be identified to be uplifted. They should be provided with a minimum period of 10 years and gradually reduced for the next 10 years. Creating EOU/ SEZs in those regions wherein income tax benefits and subsidies under various headings are given as long as the units are in operation. This follows from the point that near by countries the UAE, Dubai, Singapore etc., have zero income tax for an unlimited period. The question therefore arises, why should someone invest in India even for export markets. Hence the unit become unviable.

Most favoured nation status (MFNS): India provides MFNS to various SAARC countries, Singapore. They are able to export goods to India with two per cent duty. If you are making an SEZ/ EOU, manufacturing units in these regions should also have a three to four year minimum for supply to the domestic market without import duties.

‘Make in India’ will be defeated if SEZ/ EOU are not well maintained and exempted from taxations. Most importantly. they should provide continuous and sustained employment to people.

The GST tax incentive announced by Finance Minister is a welcome move and is in lieu of the excise exemption lost due to the onset of GST. This will not only help further economic development of the North East region but will also help in the overall ‘Make In India’ campaign. The excise duty exemption which was offered under the North East Industry and Investments Promotion Policies, 2007 was one of the main reasons why large pharma companies set up facilities in the North East, with many of these facilities having been set up in the last three years. Even though the GST incentive has been announced in the form of a refund, it is a welcome move as pharma companies would continue to avail indirect tax incentives.

The lion at crossroads